You may or may not know it, but the United States government has a website. USA.gov is dubbed the US government’s official web portal. There you can find information for citizens, businesses, government employees, and visitors to the US. Like many government websites, it is poorly designed and often confusing. It should be redesigned, especially if the Democrat candidate for president should win the 2008 election. In that case, the transition of our government from a capitalist, representative democracy to a Marxist state will require many changes, which should be reflected on the USA.gov website.

For the purposes of this redux exercise, let’s imagine that Barack Obama has won the White House. In keeping with the theme of change that saturates Senator Obama’s campaign, let’s examine the necessary changes that should be brought to the USA.gov website. As with other website redux candidates, the USA.gov website requires design changes in order to improve its function and clarity. But in keeping with the assumed context of our exercise, the site will also require copious content and directional changes.

Do not fear these changes! Like other similar socialist leaders and thinkers before him—Marx, Lenin, De Leon, Debs, Trotsky, Chavez, and others—Obama seeks to destroy only the most successful among us. You, as a member of the honorable and patriotic middle-class, will only benefit from these changes so that all Americans can enter the middle-class and all equally receive entitlement from our benevolent Socialist government.

But this is a design exercise! Don’t be confused by the politically-charged statements you’ve read thus far. This sort of language appears in this article only by necessity, so that you, the designer, can fully grasp the scope and context in which we’ll be working in this redux exercise. As designers, we need the whole picture in order to do our best work. And since media coverage of this year’s election works to obscure the whole picture, it is important that for purposes of our exercise here we look beyond what the network media outlets report.

Let me admonish you to not skip straight to the redux design for the USA.gov website. In order to grasp the fullness of that design example, you need context. Carefully study the examination of the current site first to better understand the changes instituted in the redesign example. 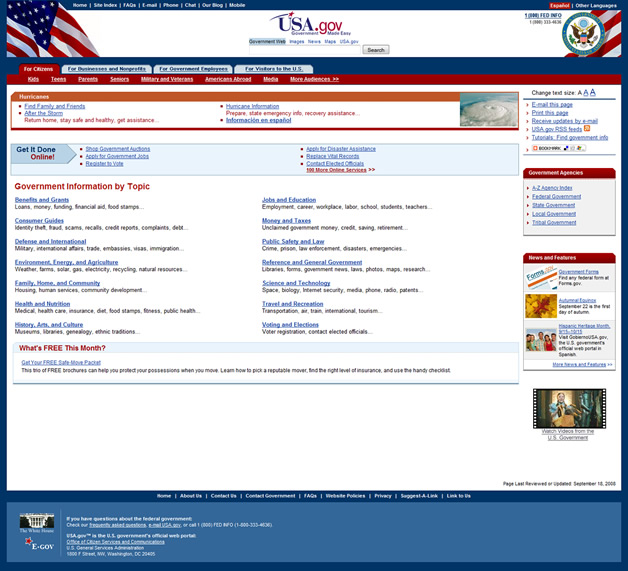 Overall
This is a very ineffective design. It amounts to a formless array of links, grouped in a less-than-intuitive system of categorization. There is a chaotic color palette of no less than 7 colors; many of which are only slight variations of others. Then there is the fluid nature of the layout. With such a dizzying array of links, colors, and text, giving the page a fluid layout only introduces more problems. At low resolution settings, the page becomes far too crowded and complex, as seen in this image, below: 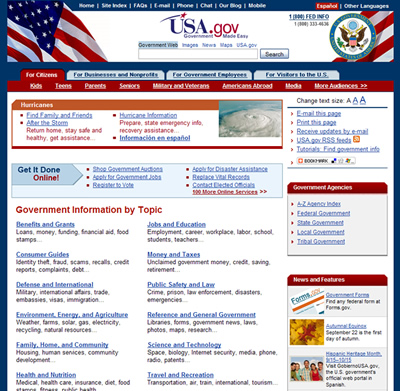 …and at higher resolutions, the page just loses structural coherence: 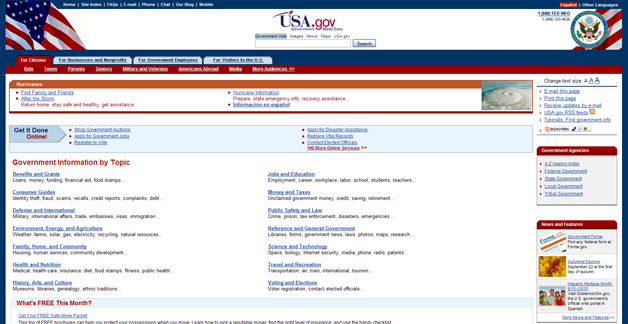 Branding
The United States is the greatest nation in the history of the world. Our government should not be so lax with how our country’s identity is portrayed graphically, even on a website. Here you can see that a weak and schizophrenic logo is used to define our nation’s government on its main website. Also, you’ll notice that the logo is crowded both by the boundaries of the header area and by the awful search mechanism.

Typically, the branding and coherence of a page is supported by the color palette selected for the site. In this case, the color palette would seem to have been selected by manatees, as determined by which colored ball they push to the side of the pool.

Start and finish
Part of what makes a strong page design is how the design begins at the top and how it concludes at the bottom. In this case, the top is a tired, old cliché. While the US flag motif is supposed to indicate patriotism, we have learned from Senators Obama and Biden what now replaces the flag as true patriotism. A new design should redefine the identity of our nation and serve to inspire us more than this outdated imagery.

The footer is not terrible, but it uses some random imagery in an attempt to conclude the page with a symbol of American pride and/or power. The result is weak and disjointed, and has no reference to any theme established elsewhere on the page.

Content
This page has content that is consistent with a representative republic government and a capitalist economy. As we’ll see, sweeping changes are needed in order to reflect the Obama administration.

On the redux design, the content will be the focus. Please pay careful attention to the specifics of the content in the re-imagined design.

Style
Typically the last of the designer’s concerns, style has a purpose. Clearly, this page portrays no sense of style for the US government. It works to rely more on clinical, mundane information and links. But even these are rendered less effective as a result of the chaotic and formless character of the design.

All in all, this is an uninspiring effort and the many design flaws tear at the effectiveness of the page. There is little here to be compelled by. What we need here is change we can believe in.

Style
When you’re trying to hide a lack of substance or want to fool the most people with the least effort, style must come first. Presumptive president Obama knows this better than most. Therefore, the USA.gov website must begin with, end with, and maintain a high sense of style. But not just any style; it must sport a style that is indicative of the sort of change a President Obama would bring to our nation. The website must sport a style that has been proven to inspire the workers (a.k.a. working families) of other socialist nations, and rely heavily on the powerful image of a strong Socialist leader.

Gone is the red, white, and blue theme, now replaced by the more unifying red typical of Socialist ditatorships. In fact, style and content will be what we concentrate on in this redux. Certain design changes are necessary, but it is the style and content that will account for the most significant changes necessary under the Obama administration. And yes, so much red color can be visually overwhelming, but it is entirely appropriate here. Socialist history affirms this fact. 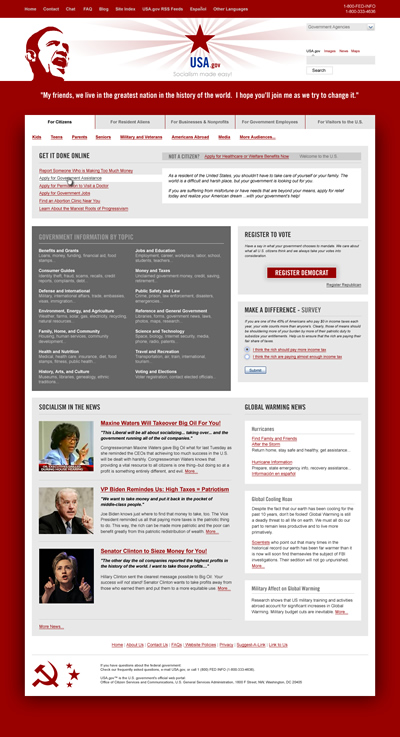 Be sure to view the full-size version of the mockup and pay careful attention to the content.

Header
Note how past clichés of patriotism are now replaced with far more compelling images. Nothing can inspire as the resplendent likeness of our charismatic leader and the epitome of Socialist solidarity: a single red star. The tagline for the site is also appropriately changed. Yes, a powerful and contextually appropriate beginning to this page.

Directly following the header is another powerful and inspiring element: a direct quote from our benevolent leader. This one exemplifies the mission of a would-be President Obama. It even makes perfect sense when you know Obama’s purpose.

[Note: all quotes on this mockup are direct, verbatim quotes from the authors indicated. Update: Except the one associated with Barack Obama at the top. This one is merely indicative of his expressed motives. Note what Snopes has to say on that one . Thanks Peter]

I have done away with some of the unnecessary navigational elements in the header area and have made certain link groupings into more concise elements. For instance, all searching is accomplished with the elements in the upper-right of the page. The main search element has been made more usable and clear by the use of more whitespace around it and an improved interface.

Main Content
I did not apply any significant redesign to the structure of the main content, but I did add some contextually appropriate content elements. In keeping with Obama’s idiom, most of the changes have been accomplished through stylistic means. However, it is the nature of the content that has received significant redirection.

With a new Socialist direction for our government under a President Obama, the main page for the US government should be realigned to account for how our government serves us and what it should communicate to us. We will have new services availed to us and new priorities will typify the government’s efforts.

Perhaps most significant among these changes is how this website can be used to disseminate news directly from the government. We Americans should begin to turn more and more directly toward the government for news of how the government is serving us. This re-imagined main page for USA.gov prominently features news items highlighting the government’s efforts to eventuate a more equitable social and economic result for all Americans, regardless of workers’ (working families’) efforts or merit.

Footer
Only one minor change is brought to the footer of the page. Where before there was some random graphic reference to government, now there is a strong reaffirmation of the ideals touched on in the header and indicative of the direction our nation is heading. The new graphics are there to reassure workers that they are the foundation of our government and that we can all be united under the Red Star of the USA. The smaller red stars are as yet unexplained, but their significance will be made clear in the years to come.

The USA.gov website could use some revision, but perhaps not the sort of change a President Obama would bring. The current website for the US government is clunky, somewhat confusing, and has some specific issues that should be resolved. However, that is no reason to institute sweeping, fundamental changes to the nature of the website as reflecting an about-face on the values of our nation and the basis for our system of government and economics.

The same could be said for our prospects in this 2008 presidential election. Neither candidate represents any greatly assured improvement in the overall direction of our country, but one of them would turn our society on its ear and destroy our economy, all the while condemning our future success as a nation under the failed model of Socialist doctrine.

Barack Obama and his Democrat Party contemporaries represent change—the same sort of change promised by Marx, Lenin, De Leon, Debs, Trotsky, Chavez, and others. History reveals the danger and evil in their misguided ideals and we must not allow our great nation to be destroyed by a failure to learn from history. For if we allow our nation to be changed in this way toward ideals that our nation’s founders rightly feared, rejected, and reviled, the design and content I present in this exercise will become reality. And the greatest nation in the history of mankind will cease to exist, to eventually be replaced by yet another Leftist Fascist dictatorship.

Readers Respond
My favorites so far, as seen from the Web…

Jeremy Keith posted this to his public Magnolia page (and, my, what a nice collection of tags you've got there, Jeremy):

Andy Clarke (Malarkey) has a way with words. Very expressive. He sent this one to his 2,235 Twitter followers: